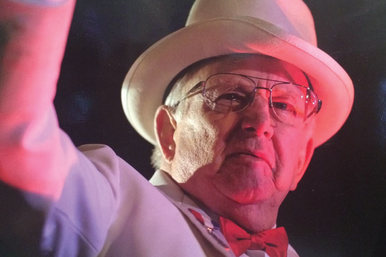 Frank C. Hooper was born September 13th, 1929 in Massena, New York. He was the son of William George Hooper and Primrose Lawrence Hooper. Frank spent his childhood years on a farm property on the banks of the St. Lawrence River on the Canadian border. He graduated from Massena High School and the University of North Carolina at Chapel Hill where he would become a member of the monogram club, receiving his letter for Track. He was the President of the Class of 1951 and Chaired or Co-Chaired seven spectacular reunions. Formal graduation from college was delayed however; due to his leading a group of students on a prank that had them locking up 50 North Carolina state troopers in their barracks for what they thought would be a fun thing to do.

Upon discharge he went to work for Sinclair Oil in Augusta, Georgia and was subsequently transferred to the home office at Rockefeller Center in New York City. It was there that he met his wife-to-be, Joan, at Christmastime in 1956. Frank would marry Joan in 1958 and they would go on to spend over 60 years dotting on and being devoted to each other.

After 10 years with Sinclair Oil, Frank spent over 30 years as President of Shive Wright and Exton Insurance Agency in Clinton, New Jersey. And, in those 30 (plus) years, Frank would leave gigantic footprints in Hunterdon County as one of its most enduring, humble and devoted community leaders and volunteers. Frank was involved in so many aspects of community life it would be impossible to mention them all. He was honored by the Clinton Town Council as Citizen of the Year and presented with a Key to the Town; by the Hunterdon County Chamber of Commerce as Citizen of the Year; by the United Way of Hunterdon County as Volunteer of the Year; and, he received a Paul Harris Fellowship from the North Hunterdon Rotary Club. Frank was the Chairman of the very first Great Bloomsbury Hot Air Balloon Races, an event that morphed into the Quick Check Festival of Ballooning.

Frank and Joan Hooper were founding members of The Church of the Holy Spirit in Lebanon, New Jersey, which had its humble beginnings in the Town of Clinton Community Center, holding its very first service there on September 11th, 1966.

Mr. Hooper will forever be linked with his 1947 White Mac Fire Truck. The white open cab fire truck has been a staple in our community for decades, having been in so many local events and parades it would be impossible to count them all. He especially enjoyed using it to drive home the kindergarten classes on the last day of school, in Califon, Clinton and Hampton N.J., collecting up hundreds of Christmas Trees each year for the Town Bon-Fire and he truly loved giving rides at the Hunterdon Developmental Center for their annual picnic, where he served on their advisory board for many years.
Frank was an avid outdoorsman and especially enjoyed the Adirondack Mountains in upstate New York. The Hooper family would vacation there every summer and took many of the neighborhood children along for their very first time. He spoke quite fondly of his childhood summers spent on 13th Lake, climbing Peaked Mountain and time spent at ‘Big Shanty”. Frank and his son, Will, backpacked in the Tetons of Wyoming, the High Sierras in California, canoed the Yukon River in Canada and the Missouri River in Montana. They spent a great deal of time exploring many western canyons and the Olympic Peninsula.

Lastly, Frank will always be known as the Grand Marshall of the Guild of Clinton Christmas Parade. His tireless dedication, blood, sweat and tears over the past 33 years, to keeping our little town Christmas parade SPECTACULAR, and a true highlight of the season for thousands of parade goers, (many generations still coming back for more) will go unmatched. It may be called The Guild of Clinton Christmas Parade, but in many hearts it will always be “Frank Hooper’s Parade”.

When hearing of Frank’s passing a dear friend said it best..... “He was a giant among us without being physically big, and he was the definition of generous. He was everyone’s role model for living a life fully. If you had Frank Hooper as your friend you were indeed lucky.”

Frank is survived by his niece Betty (Hooper) Wroblewski and husband Andrew. Nephews Carter and David Hooper and 10 great nieces and nephews. He was predeceased by his Parents William and Primrose, wife Joan, daughter Amelia, son William, and brothers Laurence and Billy Hooper.

There will be a private service for family. Due to the Covid-19 restrictions a Celebration of Frank's life will be announced at a later date. In lieu of Flowers Memorial Contributions can be made to the Willian Randolph Hooper Foundation Inc. (15 west Main Street Clinton, N.J. 08809) in care of the Clinton Christmas Parade.